Die Varieties of the “Washington Before Boston” Medal

September 8, 2012:  Washingtonia was the topic of this year’s gathering of the colonial coin elite at Rodger Siboni’s home in New Jersey.  New finds and discoveries were presented and some significant collections of Washingtonia were displayed. The highlight, in my opinion, was a New Jersey collector’s set of Washington inaugural buttons, in a condition that had been previously thought to be impossible.

This annual event always attracts some of the most knowledgeable authorities on colonial coins.  It

was the perfect venue to present the results of my research on the new die emission sequence for the Washington Before Boston Medal. I knew that I could count on constructive criticism and thoughtful evaluation of my evidence. Combining my research on the Paris Mint, my knowledge of colonial coins and my newly acquired skills with a digital camera, I looked at the Washington Before Boston medals with a fresh perspective. Additional information and the results of my analysis will be published in a different forum, but the immediate access to information available online allows me to share the summary with other numismatists. Surprisingly, we have waited for correct information on this topic for a longer period than the 14 years George Washington had to wait for the medal that the Continental Congress awarded to him in 1776.

Information about the history of the Washington Before Boston medal is available in several reference books, but the most thorough and recent source is Comitia Americana and Related Medals by John W. Adams and Anne E. Bentley, published by George Frederick Kolbe in 2007. This book is a wonderful piece of scholarship and contains important primary source information about all ten of the medals that were awarded by the Continental Congress.

There has always been a great deal of confusion about the known die varieties of the Washington Before Boston medal. This is perfectly understandable, considering that the medal has been struck continuously in Paris from at least 1789 until the 1990’s. After making a gunmetal copy die from a mid-19th Century Paris Mint restrike and then having Charles Barber engrave a new die, the Philadelphia Mint manufactured Washington Before Boston medals from 1863 until the 1970’s. Understanding the operations of the Paris Mint and the edge markings they used over the last two hundred years is difficult, even for students of French medals. When American numismatists try to develop a die emission sequence combining two different mints on two different continents, it is not surprising that confusion results.

In order to make sense out of the rich history of this important medal, the die emissions from the Paris Mint and the Philadelphia Mint need to be considered separately. I numbered the varieties using the prefix “F” for the Paris Mint in France and “US” for the Philadelphia Mint in the United States. Combining the analysis of the emission sequence from the two mints is ground zero for the confusion over these medals and I am correcting that here:

Diagnostics:
Obverse: All “O’s” in the lettering are round, not oval. There are die cracks above the “R” and below the “M” of “Supremo.” Die breaks also appear above the “E” of “ADSERTORI” and at the curl of Washington’s hair on the lower left.

Reverse: There are four hooves under Washington’s horse. The “O” in “PRIMO” is perfectly round. The reverse exergue has periods after the Roman numerals in the date and the last “I” of “MARTII” is under the “R” of “RECUPERATUM.” The reverse die shows at least some evidence of buckling in the area above “Boston.”

Obverse: The obverse is the same as described for F1 except that you can begin to see an area of die rust in the right obverse field, level with Washington’s chin.

Reverse: The Roman numerals in the date are MCCLXXV1 (By omitting the “D,” the date became 1276 instead of 1776.)  Periods are added to the date in two places.  The lettering is different, most noticeably with the “O” in “PRIMO,” which is more oval than round, and the lettering of the “C” and “R.”.

Obverse: The obverse is the same as described for F1, except that the area of die rust in the right obverse field, level with Washington’s chin, is more severe on the Manschell specimen.

Reverse: The die crack on the corrected error is above “Boston” but different than the die break on the original reverse.  All lettering on the reverse is identical to the lettering on the error reverse (F2) except in the exergue.  All of the lettering in the exergue looks different and was applied on top of existing lettering after it had been polished down.  The letter and number blur and the existence of original letter and number punches under the new letter and number punches can be seen with magnification.  This has led to the conclusion that the corrected error is not a new reverse die.  It is a touched-up error reverse die.

Obverse: The obverse is the same as described for F1, except that the area of die rust in the right obverse field, level with Washington’s chin, is at its maximum.  It can be easily seen without magnification. 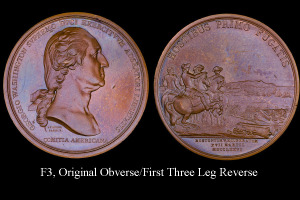 Reverse: The reverse die of this pairing is the first one to use three hooves beneath the stomach of Washington’s horse.  The lettering is crisp and clean and the “R” in “PRIMO” is open at the top.

Obverse: This is the first use of the new obverse die.  The die rust is gone, the letters are crisper and the bust of Washington has been retouched.

Reverse: The reverse die is the same as described for F3 except that the open top on the “R” has been filled in and several other letter punches have been smoothed out.

(Note: Three die states of this die are known. The latest die state is easily recognized by the break above “HOS” in “HOSTIBUS.” In all likelihood, it was the middle die state that was used by the US Mint in 1863 to make the copy die directly from the medal).

(Note also: Silver medals from these dies exist and the third die state of this die is the one most commonly seen in silver.)

Obverse: This obverse is the same as described for F4.

Reverse: The four hooves are restored beneath the stomach of George Washington’s horse.

(Note: These are known in gilt bronze and silver and sometimes have the word “bronze” inscribed twice on the edge, which was occasionally done on French medals from 1910 to 1930.)

The obverse and reverse have been completely retouched and the lettering is distinctly contemporary.  It is fairly easy to identify these.

(Note that the cornucopia and the word “bronze” were restored to the edge of French medals in 1991.  Between 1959 and 1990 the edges of all French medals were dated.)

US1 Gunmetal die US copy of F5 early state, Bronze

In 1863, the US Mint used an example of F4 to make a copy die from the medal. They were unable to fill their orders for this medal during the peak of the Washingtonia craze. This medal is easily recognizable by the thick, protruding rim, plain edge and mahogany 19th Century US Mint medal color.  There is an obvious loss of detail from the F4 and obvious die failure at the rims from the transfer process.

It is known that the gunmetal dies failed around 1890 and that Charles Barber engraved a new set of dies.  This is the first die with four horse hooves beneath the stomach of Washington’s horse.  The lettering is upright and crisp and the periods by the date have been restored as they were on the original F1.  The relief is considerably higher and more detailed than later dies.

US3 Modern Restrikes from the US Mint, with retooled details and low relief, Bronze

US3b Pewter, 38mm (Sold as part of the US Mint Collector sets of ten)

The modern restrikes were flattened to create more shallow relief.  Contemporary US Mint products can be more easily identified by the more yellow color and the shallow relief.