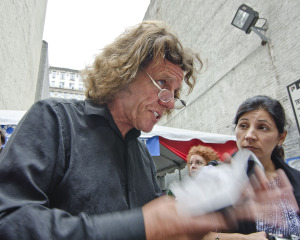 Bryan Peterson, Photographer and author of 'Understanding Exposure' conducting a workshop at Adorama Camera in New York City in 2011

As numismatists will recall, the CCAC formed a subcommittee on excellence in coin designs at its June 2010 meeting at the American Numismatic Association in Colorado Springs. While on the campus of Colorado College, Donald and several other CCAC members took classes. Donald chose a digital photography class taught by Tom Mulvaney and Clark Fogg, two of the best photographers of coins and medals in the United States.

Donald borrowed his daughter’s Nikon D80 for the class and he added a Nikkor 60mm f./2.8 Micro lens to the outfit as the instructors had recommended. When Donald came home from Colorado, he continued taking pictures and began reading books about digital photography. By September, when the Nikon D7000 was available in the stores, he ordered one with the Nikkor 17-105mm f./3.5-5.6 kit lens.

In 2011, Donald added a Nikkor 70-200mm f./2.8 VR lens and a Nikon 35mm f./1.8 lens, along with a tripod for low light photography. These lenses and the tripod enabled Donald to experiment with high quality optics. Soon after, he turned his attention to art photography.

The fundamentals of photography that Donald had learned in the early 1970’s from Harold Bardes gave him an indispensable foundation. Many photographers today rely on the automation of modern digital equipment. When Donald started, however, none of this automation existed, and he had to learn manual focus, manual exposure and manual flash. Much of that knowledge returned to him “like riding a bicycle after a long time,” he said.

Donald enjoys photography and he often brings his camera with him when he participates in other activities. Some of his work can be viewed as attachments to articles that he writes and presentations that he gives on different subjects. His art photography can be seen on his blog, www.FineArtPhotographyStudios.com.

Ultimately, her work poses questions about how we can cope with grief constructively, even when communal displays of it continue to be lethal.  [...]

The Brooklyn Academy of Music Gave Its Former President a $968,000 Housing Bonus

This news comes during a time in which many arts institutions are considering deaccessioning work due to a supposed lack of resources. [...]

The Poignant Story ‘WandaVision’ Lost on Its Way to the End

The animator took all our questions on World of Tomorrow's Kickstarter and what's driven his work for more than 20 years. [...]

Choice Home Warranty Reviews: Is This Company A Scam?

We’ve decided to make an in-depth, objective review of this company and what they offer, looking at the ins and outs of buying a warranty plan with them and comparing these plans to those of their competition so that you can make an informed decision about your home warranty purchase. [...]

A seer can help you sort your mind out, clear your anxiety and advise you on the tough decisions you have to make in life. California Psychics' customer guarantee ensures that you will have a satisfying experience. [...]

We've created the ultimate guide for the best Mother’s Day gifts. This comprehensive list comes with a wide variety of gift ideas to suit all types of moms. [...]

The Best New Movies and TV Shows to Stream This Weekend

The Aimlessness of ‘Chaos Walking’ Is Oddly Its Strength

From 360-degree panoramas to the first video of Percy moving its robotic arm. [...]

Scenes of a Bohemian Life: Mirka Mora at the Jewish Museum of Australia

That is what most defines Mirka's art and herself: her extraordinary and immediate presence that is so feminine in its nurturing, creative force. [...]

"The Series Finale" left us with a lot of unanswered questions. [...]

One of the favorite ways to use is vaping, and today we will be talking about one of the most talked-about types of cartridges, Delta 8 carts, with the incredible ease of use such cartridges have. [...]